When students can match 1/4 with 25% with .25, you know they have some understanding of the value of each.

When you ask for an explanation of their work and they don’t start and end with “Move the decimal to the left two spaces,” you know they are on to something!

Here’s a social math activity that extends the skill practice exercises in the workbook and online. A fuller explanation and all materials needed can be found on page 92 here in Changing the Way We Teach Math.

Charts such as the ones shown above are placed around the room.

Strips with fraction, decimal and percent notation to match each one are cut apart, shuffled and given to students.

Students move to the chart that matches the strip they have been given, confer with the other two students there to confirm that they are in the correct place, and the three of them explain to the whole group how they know the notation on their strips indicates the amount shown on the picture. 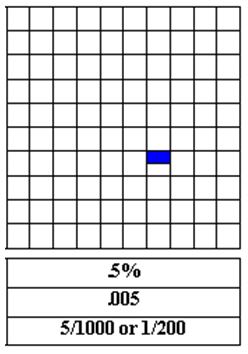 The set of charts given in the manual includes more difficult equivalencies, so the activity can be repeated with new questions as understanding grows. Or you can use charts that range in difficulty, and by judiciously assigning the strips, can allow participation by both less and more skilled students.

A blank chart is included, so students can make their own problems for other students to tackle.

In addition to the usual benefits of social learning activities, this activity makes the discussion a little easier because it starts with three students who agree about something, and asks them to explain their thinking. For adult students who have experienced failure in school, or for whom conflict triggers memories of violence, activities that require them to convince someone else or to defend their position are much more difficult, if not impossible.

If you are working with only one or two students, the same charts are useful–each student will be in charge of more than one strip.

9 thoughts on “Fractions on Your Feet”