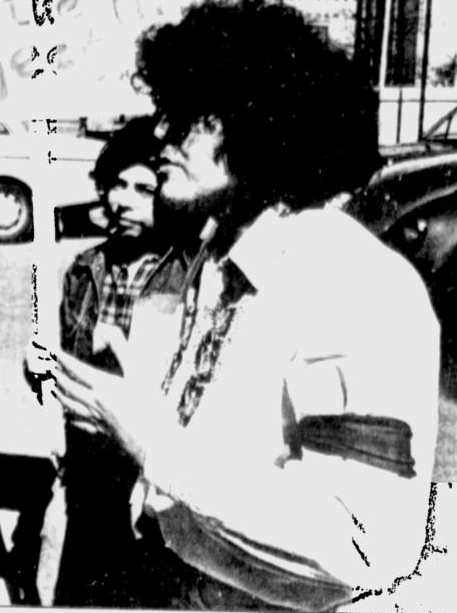 I had a taste, once, of someone using grammar to do a hatchet job on something that was full of meaning for me.

I was at a day-long workshop in Vancouver led by Carmen Rodriguez and Don Sawyer. I was new to adult education, and eager to learn; their topic was using Freirean methods with literacy/adult education students in Canada. I found the whole day exciting, and many of the things they said, and modelled as they went along, clicked right into place, although I think I had never heard of Freire until that day.

As an end to the session they divided us into small groups, and gave each group something that could be used as a prompt for a lesson. We were to examine, listen to or read the prompt our group was given, and plan how we might use it with our students.

I was teamed up with two other women, who said, as we introduced each other, that they taught English to immigrants and refugees. They also were new to the ideas presented that day, but I could tell they were not as enthusiastic as I was. They were worried about how we could come up with a lesson on the spot, using whatever prompt we were given.

Carmen gave us a portable tape player (you can tell how long ago this was) with a tape inside for us to listen to, and three copies of the lyrics to the song on the tape. It was “Bread and Roses.” You can hear it here, sung by Judy Collins. or here from the movie Pride.

When I saw the title on the lyrics sheet, my heart gave a little leap. It was a song I had sung and heard sung many times on International Women’s Day as I marched with other women, or ate with them afterwards. I knew the origin of that song, and it reminded me of countless friends and sisters in the women’s movement, reminded me of demonstrations we had organized for equal pay, for day care, for freedom from violence, for rights to control our bodies. They were causes that I felt passionate about; more, it was feminism that had helped me change from a timid, self-effacing girl to a confident woman not afraid to stand up for myself and others. I was fighting for bread and roses both, and had been for many years.

Before we hit “play,” I told my group that I knew the song. The other two expressed their relief that I had some prior knowledge. They were a little at sea with the scope of the work we were supposed to do. “Good,” said one. “If you know the song, you’ll know what to do with it.”

As the song began, I realized how perfectly it would work with my students, who knew what it was to struggle to live, to find work, to make enough money, and who wanted more, who often told me they had come back to school so their kids could have a better life. My class could talk and write in many directions, beginning with this song.

But as the song went on, I forgot about my students and was carried back to my Ottawa days as an activist in the women’s movement. I was filled with memories of people from my past, and picket lines, demonstrations, meetings with politicians, discussions, and dancing and parties and falling in love… I was filled with longing for that old life. The tears streamed down my face.

When the song ended, I couldn’t speak for a moment, but I could see the looks the other two exchanged. They had no idea what to do with my tears, or why the song, which they heard for the first time, should elicit such a reaction from me.

The Grammar Hatchet Comes Out

As well, they were anxious about the task at hand. “What do you think we should do?” asked one, looking to me to start. The other didn’t wait for me, but jumped right in. “I think we could use it to teach the present continuous tense,” she said. “See how it starts, ‘As we go marching, marching…’”

The other quickly agreed, pointing out the other instances of words ending in “-ing.”

I could see they were going about the task the only way they knew how, but they planned a complete grammar lesson right there and then, in front of me, never acknowledging my tears, or talking about any of the content of the song.

Although I am fascinated by grammar, and like to talk about it, that day, numb as I was, I could not turn my attention to it.

I’ve never had a piece of my own writing hacked to pieces by the grammar hatchet, because I was good at writing “correctly” when I was in school. I can only extrapolate from this experience of having my emotional response hacked to bits to imagine what it must be like for a student to put his life on paper and have the teacher respond to the grammar and punctuation errors.

People will not write anything meaningful if they fear the grammar hatchet. My job as a teacher is to make it safe to write, to make it possible for them to make art out of their lives. Grammar, punctuation, style, organization, rhetoric–all will be part of making the art. But not the first thing. Never the first thing.

When I think about the people whose work I’ve helped bring to an audience, even to a small audience of their classmates, I am in awe that they would trust me with their words and their hearts. So I treat them tenderly.

I’ve had the grammar hatchet turned on me. I know what it feels like.

16 thoughts on “The Grammar Hatchet”